Learning about genetically modified crops through science, evidence and reason
Leave a comment

Between 2004 and 2010, pollen drift from GE papaya to non-GE papaya was examined in commercial plantings and replicated field trials by Dennis Gonsalves and co-investigators. Results showed very low levels of transgene flow to non-GE papaya, most likely due to the self-pollinating characteristic of commercial varieties. The results also suggest that organic farmers could grow non-GE papaya in fairly close proximity to GE papaya and still have very limited transgene flow to their plants, and even benefit from reduced disease incidence due to the protective effect of nearby GE plantings. 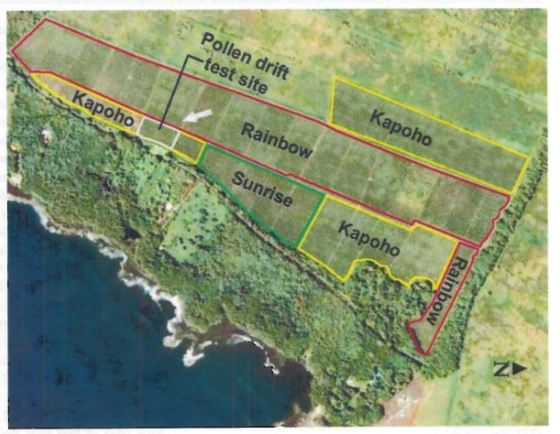 Abstract. In 1992, papaya ringspot virus (PRSV) was discovered in the Puna district of Hawaii island where 95% of the state of Hawaii’s papaya was being grown. By 1998 production in Puna had decreased 50% from 1992 levels. A PRSV-resistant transgenic papaya ‘Rainbow’ containing the coat protein gene of PRSV was released commercially in Hawaii in 1998, and saved the papaya industry from further devastation. In the ensuing years since the release of the transgenic papaya, a number of farmers grew hermaphrodite nontransgenic ‘Kapoho’ papaya in close proximity to plantings of hermaphrodite transgenic ‘Rainbow’ papaya. These plantings provided a unique opportunity to assay for transgenic-pollen drift under commercial conditions. Between 2004 and 2010, assays for the GUS (beta-glucuronidase) transgene in embryos were done to study transgenic-pollen drift in commercial ‘Kapoho’ plantings and in replicated field plots.

Read the full paper published in Tropical Plant Biology in 2012.

Is Organic Papaya Production in Hawaii Threatened by Cross-Pollination with Genetically Engineered Varieties?